I'm at the business end of Sydney Motorsport Park's main straight and a quick glance at the Jaguar F-Type's speedometer shows 235km/h.

All great, except big markers are screaming the distance to a looming left-hand corner as a warning to throw-out the anchors so I stomp on the brake pedal as though it's the world's biggest, ugliest spider.

All wide eyes and white knuckles, I'm a passenger in the world's ugliest braking experience and I know it's going to be the worst day of my week.

On my next lap The Voice comes in halfway along the straight. "Brake early, brake firmly and then get back on the throttle and carry some momentum into the corner," it says. And I do. And it works. Time slows, I set-up the car for the big, sweeping left-hander, apex it at maybe 140km/h and sweep out the other side somewhere north of 160 with an imaginary fist pump for good measure. 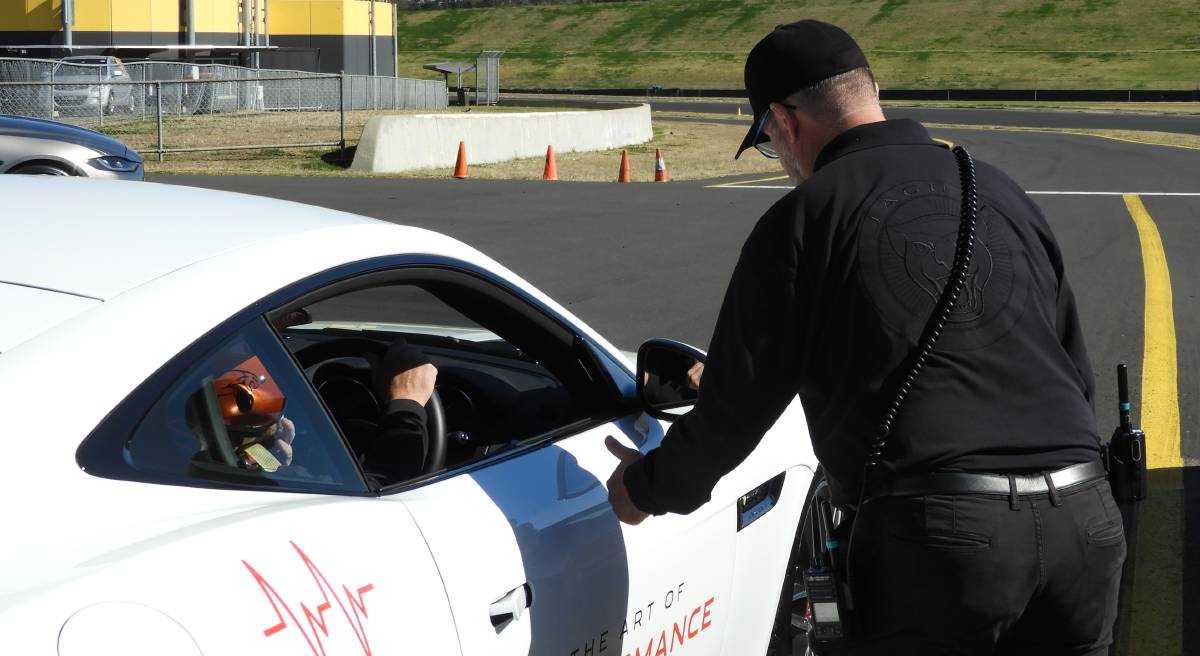 The Voice, better known as instructor Brett Kuhmer, tells me a lot of things about car control over the next couple of hours and I leave the place with way more driving knowledge than I had when I arrived .

Driving cars fast, I was once told, involved a reasonable degree of heavy-handedness. Fast drivers didn't coax speed from cars, they punished them, forced them to go hard and then dragged-out a little bit more. And if neither car nor driver was all hot and bothered at the end then apparently not enough effort was being applied.

Turns out the fellow who told me that was wrong.

So there I was on this sunny morning at Sydney Motorsport Park for the Jaguar Experience, a track-oriented program that, on the surface, lets participants go flat-out in a safe environment, driving cars that are well up to the task, doing things that cannot be done legally on public roads.

But it goes deeper than simple speed satisfaction. Participants are given driving skills they can easily apply to their daily driving, the information imparted by professional instructors with solid motorsport backgrounds. And of course there's the chance to appreciate some of the finer cars in life.

Pit lane is awash with Jaguar automotive excitement - rapid XE sedans, slinky and sultry F-Type coupes, I-Pace and E-Pace SUVs and even the big XJ saloons - and all of it promises something special.

The instruction starts (seat position, footwear, posture, leg and foot positioning, holding the wheel correctly) and finishes (post-session debriefs) in pit lane. Between those two points, out on the track, the information flow from instructor to driver is constant and helpful, participants shown how to stay out of trouble through situational awareness and car control. INSTRUCTOR AT WORK: Brett Kuhmer explains the dynamics of a Jaguar F-Type to drive day participants.

It is one-on-one coaching, too, and while the racetrack allows speeds that would bring punishment on public roads there is no requirement - or pressure - for drivers to step out of their comfort zones.

Chief instructor Ian "Safety" Barratt says racetracks are used because of Jaguar's motorsport heritage and for another very practical reason: "Racetracks are safe because all the traffic goes the same way."

The Sydney Motorsport Park circuit, replete with elevation changes, a dozen corners and a variety of braking and acceleration areas within its 3.93 kilometres, is fun and challenge in equal measure.

The Jaguar is a confidence booster, its V8 engine roaring under acceleration, its exhausts popping and crackling on every downshift as it revels in the moment, communicating in a way few cars ever could. The more I drive it the smoother I get and the better I understand both it and the vast chasm between driving quickly and driving fast.

A track orientation, with the car driven by the instructor, precedes the cabin drill and is a great way for circuit newbies to see which way the corners point. After that? It's showtime.

Jaguar's track day Experience is structured to maximise both enjoyment and learning. Every trainee gets 20 minutes wheel time in each of the cars, rotating through a fleet of XE 300 Sport sedans and V6 and V8 F-Type sports cars and always with the same instructor.

There is plenty to learn and it comes easily. Car craft, basic cornering principles (who knew that smart drivers break corners into their composite parts - turn-in, apex and exit - and treat each part individually?) and the ability to be gentle at high speeds.

Weight transfer from side-to-side and front-to-rear is explained, as is judging distance at speed. Correct braking technique is shown because - surprise, surprise - most of us really don't know how to do it properly.

The need to look into the distance and through corners is explained along with the important fact that looking at something means you will instinctively aim for it and probably hit it.

Time out of the car and in the pit area gives time for a coffee and the chance to think about the techniques shown and maybe even discuss them with others before rotating into the next car to put ideas into practice.

Best of all, the Jaguar Experience turns a technical subject into a fun experience driving impressive cars and learning a number of relatable life-saving skills. Now that's what I call a bargain.

The Jaguar Experience operates at circuits in Sydney, Melbourne, Brisbane and, from next year, Perth.

Upcoming dates and venues are:

The Experience costs $495 per person but is free for new Jaguar owners whose ownership experience is less than 12 months.

ROLLING THUNDER: Jaguars of all types prepare for work at Sydney Motorsport Park.

Jaguar's entire performance and luxury philosophy came from company founder Sir William Lyons, who once decreed his cars should have "grace, space and pace" and his successors have remained steadfastly true to that edict.

Jaguar cars have always been about excitement and experience from the very first one, the stunning 1935 SS100 roadster, all the way through to the current crop.

The genes embedded themselves in a string of post-war roadsters and saturated the famous C- and D-Type sports/racing cars that claimed, among other things, four of Jaguar's seven Le Mans 24-hour race wins.

The achingly beautiful E-Type from the early 1960s, was based on the D-Type racer and featured racing car-style construction, disc brakes, precise steering, independent front and rear suspension and a lusty six-cylinder engine that propelled it to 240km/h. Not bad for a production sports car costing GBP£2097 (A$3797) back in 1961.

Even Enzo Ferrari, whose cars would be trounced by the delectable Brit in races the world over, described the E-Type as the most beautiful car ever made. Endorsements just don't come any better than that.

That excitement factor washed-over Jaguar's sedans, too, with the compact Mk2s winning more touring car races and championships than you could shake a stick at and even the bigger, loftier saloons were and still are capable of raising their skirts and showing their prowess.