Many in the Manning and Great Lakes community know Christine George through her role as chief inspector and most senior female ever stationed at Manning-Great Lakes Police District.

She is a strong, community-minded woman.

What they may not know, though, is that her roots in cattle farming are deep. She has a profound love of animals and her strength, in part, is borne of resilience formed through dealing with outdated sexist prejudices in the workforce, and coping with the natural disasters that come with the territory of living on the land.

Christine grew up as an only child on a dairy farm in the Manning Valley. She left for the big smoke in 1990 to pursue a career in policing. She returned to the family property 10 years ago, to work in the Manning-Great Lakes Police District, and to help her parents out on the farm.

What used to be a Friesian dairy cattle farm is now Edinburgh Park Shorthorn Stud with a 'boutique' herd of 30 cattle.

While Christine's father does the farm work, such as driving the tractor and planting paddocks, Christine helps out moving and feeding the cattle before and after work.

In fact, she says, working with the cattle is therapeutic.

"There is nothing I like more than getting up at six in the morning, walking up the farm and talking to cows before I let them in the paddock," Christine says.

There is nothing I like more than getting up at six in the morning, walking up the farm and talking to cows before I let them in the paddock.

"It's just such a nice way to start the day. The fresh air, no-one around, the cows are all happy to see me, as opposed to people sometimes," she laughs.

Christine particularly enjoys showing her cattle, something her job doesn't often allow time for these days. She has been a regular at local shows, and has placed first, second and received a highly commended at the Sydney Royal Easter Show in the past.

"It's something that I've been doing since I was a kid. I just love preparing the cattle, clipping the cattle.

"Last time I was at Taree Show I had a bull with me, my bull who thinks he's a dog, so he spent the day sitting, as opposed to lying down - he wanted to sit and look at everything!" 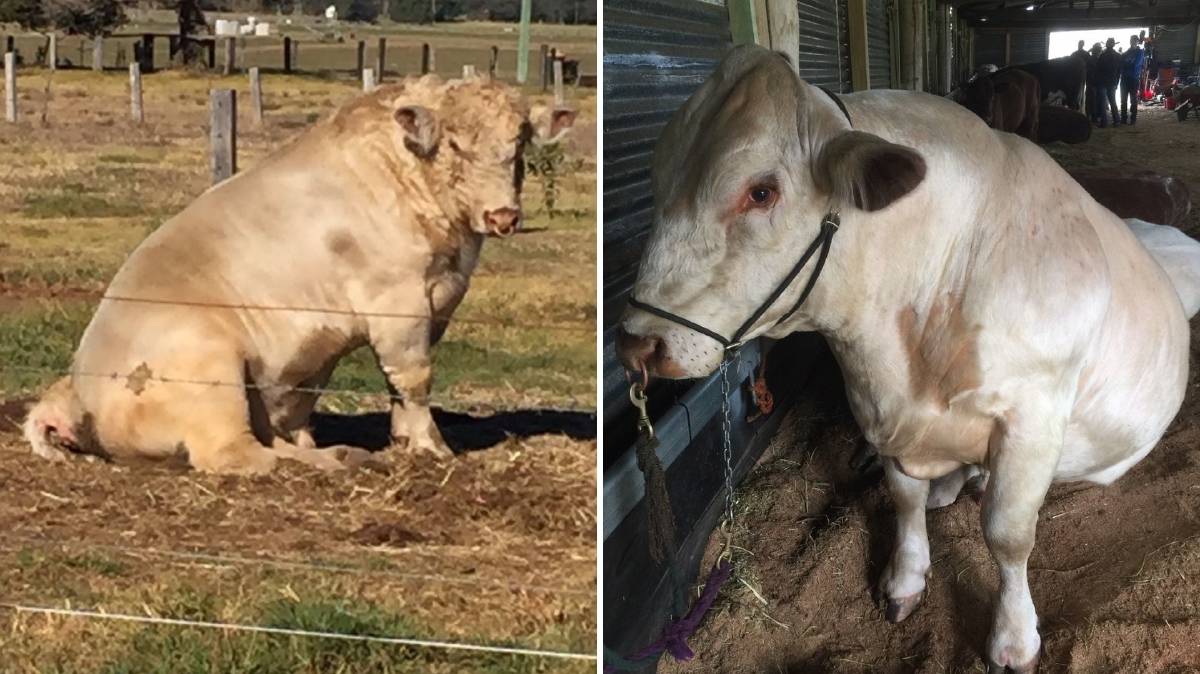 "He thinks he's a dog. He follows me around," Christine said of her bull, Reuben. Photo supplied

She speaks of her bull, Reuben, with affection. She also has a soft spot for her prize cow, Venus, the mother of a heifer she took to the EKKA in Brisbane, winning Reserve Champion Shorthorn Heifer.

"She's been the mother of a lot of my good stuff."

Thankfully, the drought didn't take a toll on the stud farm, as they have underground irrigation. And the fires didn't reach them either. 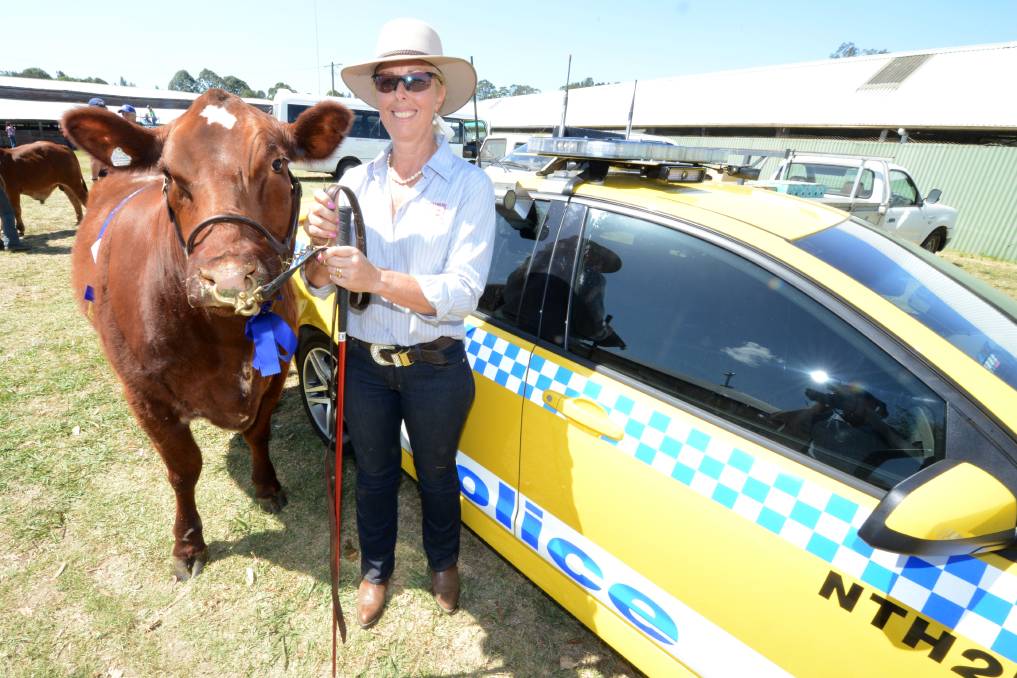 However Christine was working an average of 15-16 hours a day during the bushfires at the end of 2019.

"I don't live in a fire area (but) some of the other (police) staff do, so I always said I will work 24 hours a day while ever we have any emergency that's not a flood," she said.

Because, being on Taree Estate, floods are a risk.

He was there holding little calves heads' about water and holding a fence post at the same time, trying to save my cattle.

Christine remembers the record 1978 floods well (she was 12 years old). The house she is now living in, the second one on the property, 'went under' at the time.

"As we were coming up to the flood this year I was getting very nervous, because everything was as it was in '78, in the days leading up. And I knew, living in that house I was always at risk of a flood."

Thankfully she trusted her gut instinct.

"I was lucky. I got out with two suitcases, a couple of boxes, and my kitten, and my golf clubs."

However, she hadn't got her cattle off the farm. She didn't have time. Her next door neighbour helped out by cutting the fences so the cattle could seek higher ground.

"He was there holding little calves heads' about water and holding a fence post at the same time, trying to save my cattle."

Christine lost four calves. "One of them was washed away three times and when he saw me he came running and we put him on the ute and brought him home. But the others got washed away.

"I had one in the front paddock, but in the rush to get away I had forgotten about him, and he didn't make it. And his mum (Venus) apparently walked the paddock looking for high ground for him. She was my prize cow which is why she was in the front paddock with the baby.

I still feel bad that I wasn't thinking clear enough to let her out with the other cows.

"I still feel bad that I wasn't thinking clear enough to let her out with the other cows."

Eight of her parents' herd were also washed away, but they were able to recover most of them.

Christine did help to save stock from her mother's store, Margaret's Underfashions in Pulteney Arcade, and she helped to save other residents of Taree Estate, which in turn helped her deal with her own personal trauma.

"On the afternoon of the flood on the worst day, the SES had asked me to go and do rescues with them. So rather than me standing around and crying because my house was underwater and the shop was underwater, I was in the rescue boat making sure the people down on Taree Estate were okay and seeing whether we could get them out of their houses," Christine said.

She also worked on the rescue boat the next morning, having to cut fences to be able to reach the houses.

"And then we just plucked people out of their houses. Once we had accounted for every person, they dropped me off at my gate.

The cows with the young calves were bellowing at me because their calves were missing, which was traumatic.

"I went and looked in the windows of my house, and I could see the fridge was on its side, and the lounge and recliners and stuff were all lying on their side, and there was mud ankle deep.

"And I was like 'I can't face this today'. And so I went up and talked to the cows instead and made sure they were alright, worked out what was missing. The cows with the young calves were bellowing at me because their calves were missing, which was traumatic. It made me feel bad - I had a chance to fix this and I didn't."

As much as Christine had worked to help people during the floods, help flowed back to her in the aftermath with people, including her staff, coming to help clean the house out and recover items.

"I didn't even have to ask. It was amazing."

Christine was able to move back into her house four months later.

"I've still got bits and pieces to do," she says. But those things she has to do while working full time and helping to run the farm.

"I am very time poor. I'm always running from one place to another. My recliner will never wear out!"