As journalists, we're used to dealing with people who may have had some problem with something we've written. For most of us, it's nothing more than a narky comment on a story, or a vindictive tweet.

But Daily Telegraph journalist James Phelps remembers the day the police came to tell him someone had put a bounty on him, and they considered it a serious threat.

It wasn't some disgruntled rugby league supporter, or a motor sports enthusiast who didn't agree with his assessment of a V8 supercar race - those are Phelp's main rounds with the paper.

It was a prisoner inside of one of Australia's hardest prisons.

"The police turned up one day to tell me someone had put a hit on me from inside prison," says Phelps.

"They took it pretty seriously."

While Phelps' first love is sport - he was a handy rugby league player in his youth - he's also made a name for himself writing a series of non-fiction books about the Australian prison system.

In 2014 he published Australia's Hardest Prison: Inside the walls of Long Bay Jail, and it was so well received he followed it up with others that looked at Goulburn jail and the country's most notorious women's prisons.

In Australia's Toughest Prisons: Inmates (2017) he spoke to inmates who knew men such as Martin Bryant, Ivan Milat, Carl Williams and Neddy Smith, to find out what their life behind bars was like.

Phelps had never given prisons much thought, caught up as he was with his love of sport.

Not long after co-writing the autobiography of racing car legend Dick Johnson in 2014, he was at a barbecue where some prison guards were present.

"These guys were around the fire telling stories and I almost fell over," says Phelps.

"I made a note to approach a couple of these guys a week later thinking, if those stories were true one, I'd try to get a book out of it.

"Turns out those stories at the barbecue were the filtered, watered-down versions that they tell at parties, because the real stuff's too shocking to talk about."

And now he's turned those shocking stories into his first fiction book.The Inside Manis the story of Riley Jax, former army engineer now convicted murderer. The only trouble is he can't remember a thing about the night of the murder. Now he's facing a new life inside where only the toughest survive. But when a series of deadly bombings start happening across the world, the only man who might be able to find the truth is inside.

As well as being a thrilling ride, The Inside Man is a glimpse into brutality of inside life. Phelps doesn't shy away from the gritty detail, with depictions of violence, rape and corruption.

"A lot of the stories in The Inside Man are real stories, I've changed them around a little, changed names," he says.

"My editor was going this is impossible, this wouldn't happen, and I had to convince them that it did."

Even though he's the hero of the book, young Riley Jax doesn't get an easy run in prison and that was always Phelps' intention.

"I was told I had to create an action hero and set it inside a prison.

"The easiest way to do that would have been to put a ready-made action hero into a prison and let him go running around kicking ass but after writing all those prison books, I know that the reason people read them is because they're afraid of prisons.

"The question people always ask is what would happen to me if I was sent to prison.

"There's no way I could have got that sense of fear in the book if I had sent someone like James Bond into prison, I needed to send in a vulnerable young kid.

"If part of it was putting the reader in the shoes of someone going to jail, how you would deal with it, what would happen, it had to be someone like Jax." 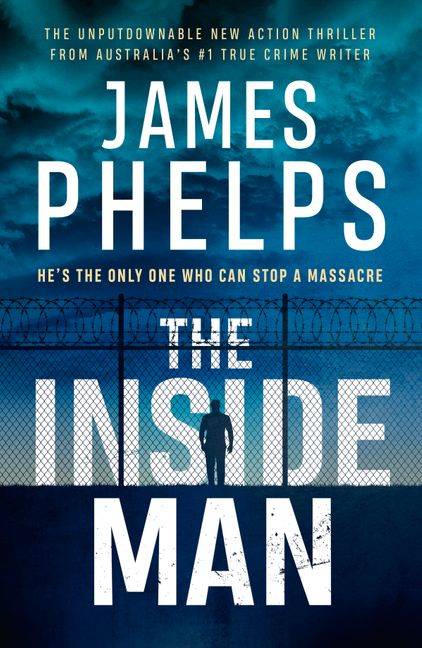 Phelps has worked hard to build up contacts over the years. He's been allowed to spend supervised time inside, interviewed countless inmates and former criminals.

He once spent three months driving around with convicted murderer and former policeman Roger Rogerson, who's currently serving a life sentence in Long Bay Jail.

"We spent months driving around Sydney, he was introducing me to crims and cops.

"I was with him the day before the body [of Jamie Gao, the man Rogerson and his co-accused Glen McNamara] washed up on the beach in Cronulla.

"And I reckon I was with him a day or two before he actually committed the murder."

We start talking about the role of prisons in pop culture. Think Escape from Alcatraz, Shawshank Redemption, Oz, Prison Break, Porridge, Green Mile, Orange is the New Black, Wentworth, Prisoner, the list goes on. What is our fascination?

"It's absolute fear, the question, could I survive in prison? Even for us law-abiding citizens, there's this fear in the back of our heads - all it would take is one slip-up, it might be a road accident, we might lose our temper, the fear of being wrongly convicted.

"It's also a fascination with the monsters behind bars, serial killers, murderers, pedophiles all feature in popular culture, imagine living with them, this is where they all are."

He says he wouldn't last a second in prison given the things he's written, but even he thinks how he might survive.

"One of the most interesting questions for me is whether or not you ask for protection in prison. Is asking for special treatment admitting you're weak? And if you do, you're housed with sex offenders and disgusting people, and they're the people you're with, but if you don't, and you take your chances with the general population, and you're white and you're young, you've got a target on your head from the beginning."

There's a sequel for The Inside Man planned. Phelps asks me what I think should happen next - there is hefty twist at the end of this one that could take it anywhere - but I refuse to get too involved.

You never know who's reading Phelps' books and I'm not sure I like the idea of a bounty on my head.

This story Would you survive inside prison? first appeared on The Canberra Times.